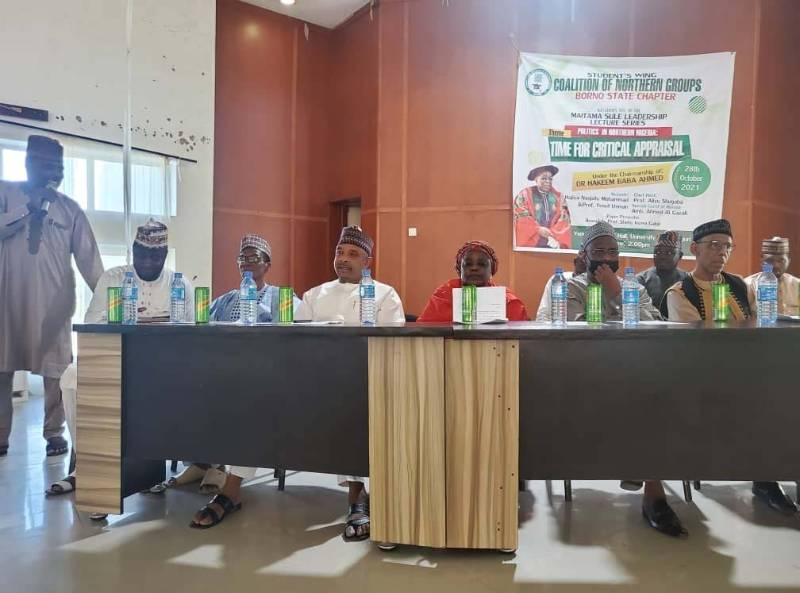 As buildup to the 2023 fresh elections, Northern Nigerian leaders and youth have warned that any political party that fields an aged, incompetent, or incapable candidate should forget the region’s votes.

Making this known at the Maitama Sule Leadership Lecture Series organised by the Students Wing of Coalition of Northern Groups (CNG) Borno State chapter, on 28th October, 2021, spokesperson of the Northern Elders Forum, Hakeem Baba-Ahmed warned that the North will turn its back on any party that deliberately and specifically tilts advantages to candidates from particular regions.

The next President, according to the NEF spokesperson, should emerge from a credible election from any part of the country, but he or she must be first and foremost a Nigerian President and those Northerners with ambition to run for the office should know that Northern Elders Forum, Coalition of Northern Groups and many others are not merely supporting the emergence of a Northerner to succeed President Buhari.

He reminded the rest of the country that the North does not need to flash its scorecard on commitment to national unity and the democratic process and that it has paid a huge price for the unity and survival of this country, for which it has no regrets.

The North, he said, has never been a parasite in Nigeria, and while the North believes that it serves all interests to stay as one united country, it will however be “difficult for us to continue to defend our co-existence if it can only be achieved at our permanent expense.”

He said those who should question their own commitments are people who threaten to leave the country or make it ungovernable if the next President does not bear all the hallmarks of their preferences.

“The rest of Nigeria has a legitimate cause of concern when sections of the country that have become virtual hostages of irredentists, suggest that only when they have the Presidency will the country eliminate organized violence that has made massive inroads into lives of Nigerian citizens living there.

Taking a swipe at President Muhammadu Buhari’s administration, he said it has dropped the ball in the manner it had allowed insecurity, irredentism, corruption, poverty, national cohesion, unemployment of the young and faith in the democratic process to become a way of life in Nigeria today.

He noted that with the unglorifying record of performance of the Buhari administration, which many mischievously see as solely a Northern creation, Northerners are also deeply skeptical that being Northern alone is not enough to make a good leader.

Therefore, he said, the state of the North today represents the best caution that what you see as yours is not necessarily the best where you have a choice, and every Nigerian must have a choice.

“If a Northerner is to become the next President with our votes in the North, then he has to be the best among all others.He has to convince us in the North that he understands our problems, and has the capacity to solve them. He must have the disposition, energy, health and intelligence to heal the breached pluralism of the North and build bridges across the entire nation.

“He has to be able to lead a country that is failing in a number of significant areas.A personal ambition to be President will not be enough, and we will scrutinize and advise those who will listen, to avoid the temptation to put in place persons who just want power, but not responsibility.

“A president from the North must have the exposure and network to reintegrate all parts of Nigeria into one country and one vision. He must have the courage to eliminate threats of insurgents, bandits, kidnappers, irredentists, impunity, the drugs pandemic and corruption.

“He must lead with a sense of mission and urgency; the wisdom to negotiate where necessary and the clout to hit hard where he needs to; and a clear understanding of the sources and nature of our threats and their solutions,” he said.

“The point must be made again that every Nigerian, irrespective of his political party or identity must be free to contest within his or her party to be fielded as a Presidential candidate, and we should reject any party that specifically and deliberately excludes any Nigerian from exercising the same right other Nigerians have,” he said.

Backing this position, another speaker at the event, Hajiya Najatu Mohammed charged the youth to rise and confront the challenges of regaining control of their destiny, urging them not to rely anymore on the shaky path being laid by those who pose as Nigerian leaders today.

She lamented that those in position of leadership are people who are ill-equipped and ill-prepared to lead but for their personal political ambitions and quest for criminal acquisition of wealth.

“The time to get organised is now, time to move by you, the youth, particularly students in higher institutions to wrest control of your affairs and rescue your generation and the next from the margins of decadence, decay and irrelevance being towed by our current leaders,” she said.

Similarly, Professor Usman Yusuf, former Executive Secretary of the NHIS, impressed the urgency for the youth to register massively as their only sure way to flush out those he called, bandits in government.

Professor Yusuf said those occupying positions of leadership today are worse than bandits as they breed banditry and nurture the ground for all forms of criminality by entrenching corruption, impunity, official lawlessness and excessive greed.

“This can only be remedied if the youth, particularly students in higher institutions massively acquire PVCs and participate actively in the campaign to sensitise the northern population to do so,” he said.

In response, the Board of Trustees Chairman of the CNG, Nastura Ashir Shariff warned the youth against risking their collective future in the hands of any of major political parties in the country presently.

He categorically warned that any of the major parties that fields incompetent, weak and aged candidate would be roundly rejected by the North and charged the youth to remain vigilant with regards to the direction the parties are conducting their affairs.

One thought on “2023: Criteria for presidential candidates mentioned by Northern Nigerian Leaders”