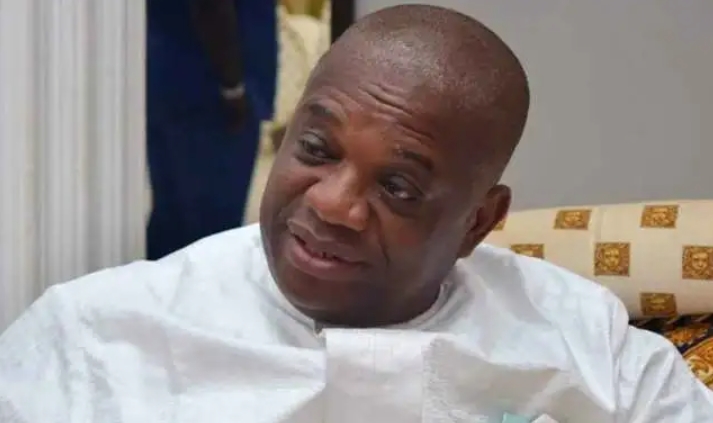 Mr Kalu’s media aide says the senator has not declared his intention to contest for president in 2023.

Campaign posters of the Senate Chief Whip, Orji Kalu, for the 2023 presidential election under the platform of the All Progressives Congress have surfaced in Umuahia.

The posters, which bore the inscription: “Vote Dr Uzor Kalu for President – A New Nigeria is here”, were largely seen at Abia Towers’ roundabout, on Enugu-Port Harcourt Expressway.

The posters, said to have been produced by the Arewa Youth, have other inscriptions that described Mr Kalu as a “heavyweight” politician and a “nation builder” as well as a “man poised to salvage the economy”.

Reacting to the development, Mr Kalu’s media aide, Maduka Okoro, told the News Agency of Nigeria (NAN) the posters did not emanate from the office of the former Abia governor.

Mr Okoro said the former governor has not declared his intention to contest the 2023 presidency.

He described it as the handiwork of those who either love Mr Kalu for “the good he is doing” or those who with “other intentions”.

“We did not paste posters of Senator Orji Uzor Kalu anywhere. We have not contemplated on that and we have not made any categorical statement.

“We are busy trying to create history for our people – renovating schools, building roads and other projects, so that our people can enjoy the dividends of democracy,” Mr Okoro said.

He said that Mr Kalu, who is representing Abia North Senatorial zone, would address the press if he had such intention.

There are clamours for the South-east to produce the next Nigerian president in 2023.

One of those drumming for support for the emergence of an Igbo person as president is the Association of Arewa Community in Igboland.

Its National President, Mohammed Umaru, who made the appeal at a news briefing on Sunday in Umuahia, said it was important to support the Igbo people to actualise their presidential ambition come 2023.

Mr Umaru said the group was a non-political organisation, made up of members from all the northern states living in the South-east region.

He said an Igbo person has all it takes to salvage the country.

“The north, west and South-south have all ruled the nation as executive presidents.

“This is the time we should give our consent for an Igbo executive president,” Mr Umaru told reporters.

One thought on “2023: ‘Kalu for president’ posters flood Umuahia”