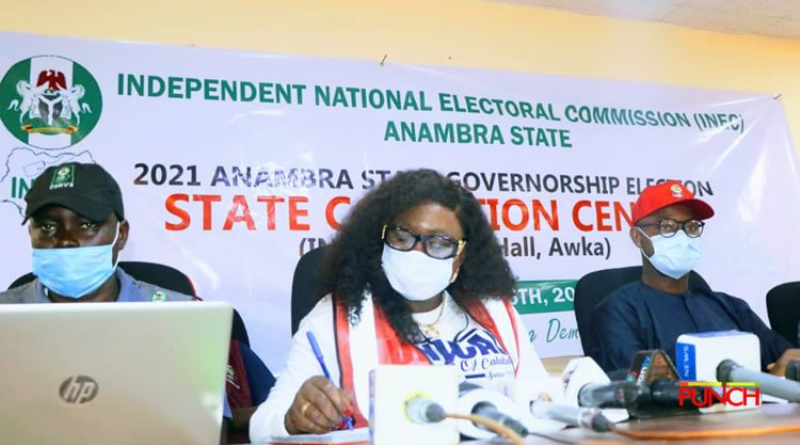 The Director, Voter Education and Publicity of the Independent National Electoral Commission, Victor Aluko, says some collation officers of the commission are not good at Mathematics.

Aluko stated this while reacting to the conflict between two officials of the Commission in the Orumba North Local Government Area during the Anambra State Governorship Election last weekend.

The PUNCH had earlier reported that the Returning Officer of the LGA, Michael Otu, said he nearly lost his life when thugs attacked the Local Government Collation Centre during the election on Saturday.

“I am lucky to be alive. I was teargassed and as a BP patient, I nearly lost my life. I was forced to sign a result which wasn’t collated by me. The Polling Officer, Comfort Omoroge, who worked with me, compromised,” Otu had said.

In her reaction, Omoroge had stated that Otu was confused and didn’t know the difference between casting of vote and collation of results.

“This man (Onu) has not been involved in an election and it is obvious from the way he behaved on the election day. His actions put us at risk,” she added.

Speaking on Monday, INEC Director, Victor Aluko, said both officials would be interrogated by the Commission to unravel what actually happened.

Aluko, who spoke on ‘NTA Good Morning Nigeria’ breakfast programme monitored by The PUNCH, also said though many of the ad hoc officers recruited for the election were trained, some of them find Mathematics challenging.

He said, “We were not there in Orumba North when the rural rumble was taking place between the Collation Officer and the INEC Electoral Officer but what we could see when the Returning Officer was collating was that she did the right thing by setting up an emergency team to review what was submitted by the officer.

“We recruited many Collation Officers and of course, we recruited intellectuals from the academic for local government ward collation position but sometimes when people have to perform such important duties, some people may not be so good in Mathematics or Arithmetic.”

‘Why INEC can’t declare a winner yet’
The INEC official also defended the declaration of the November 8, 2021 in Anambra as “inconclusive”, insisting that elections did not hold in the Ihiala LGA of the South-East state due to “security threats”.

Aluko also said it was better not to deploy electoral officers to Ihiala than to deploy officials and later mourn them.

INEC Chief Returning Officer for the governorship election, Prof Florence Obi, had declared the governorship poll inconclusive and said that a supplementary election would hold in 362 polling units in Ihiala LGA on Tuesday, November 9.

Commenting, Aluko said, “As an electoral body, INEC managed the situation the way it should. What happened was that the Returning Officer simply postponed the collation and the declaration of the winner pending the time we would conduct election in Ihiala Local Government where due to security threats, we had staffing and logistics constraints and we could not deploy.

“And of course, she (Obi) rightly relied on the sections of the constitution and the electoral act and the commission’s guidelines for the election and in order to be fair too, we need to bring Ihiala at par with the other 20 local governments before we can move further. That’s the simple situation now and we are making arrangements to conduct that election tomorrow (Tuesday) in Ihiala and complete the process.”

Aluko further said though the candidate of the All Progressives Grand Alliance, Charles Soludo, won 18 of the 20 LGAs where election were held, he cannot be declared winner yet because the total votes in Ihiala were more than the margin of votes that the ex-Central Bank of Nigeria governor was leading with.

Out of the 20 local governments where elections were held and results announced, the APGA candidate was declared winner in 18; the candidate of the Young Progressive Party, Ifeanyi Ubah, won in one; while the Peoples Democratic Party candidate, Valentine Ozigbo, took the other one. The governorship candidate of the All Progressives Congress, Senator Andy Uba, had yet to win any LGA.

According to INEC, over 2.5 million registered voters are eligible to participate in the governorship election in Anambra State with a population of about five million people but fears of the worsening security situation in the state and threats by the proscribed separatist group, the Indigenous People of Biafra over the detention of its embattled leader, Nnamdi Kanu, have been said to be responsible for the low voters’ turn out during the governorship election in the state.

One thought on “Anambra election: Some collation officers not good at Mathematics, says INEC director”