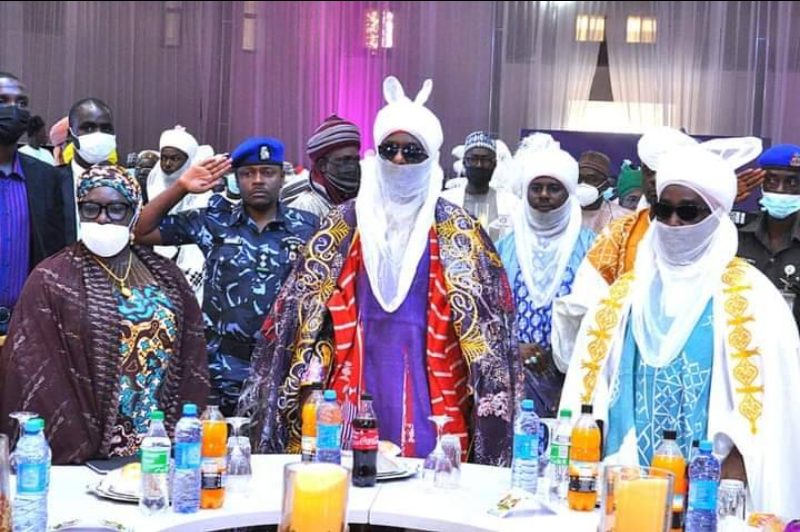 Former Emir of Kano, Muhammadu Sanusi ll has said that Nigeria as a country has made no progress in the past 40 years.

The former Emir who was also Governor of Central Bank(CBN), spoke at a colloquium in Kaduna on Saturday to mark his 60th birthday anniversary.

The event which was moderated by ace journalist, Kadaria Ahmed, had in attendance Governor Aminu Tambuwal of Sokoto State, former Deputy Governor of CBN, George Moghalo, the Deputy Governor of Kaduna State, Emir of Zazzau, other Emirs and chiefs, University dons, other distinguished Nigerians, among others.

According to the former Emir, “I told my family during a dinner to mark my birthday that, maybe one of the reasons that I am able to face any challenge is that I know that, no matter what happens, there would be friends who are standing waiting for me: Nasir El-Rufai, Bukola Saraki, Albert Wigwe, Aig Imoukhede, Aliko Dangote, all of them. So, it is a blessing to have people who are with you in good times and bad times, who are with you for who you are.”

“Usually when people gather like this, it is for either someone who is in office or someone who is dead. You leave office, especially when you are seen as a trouble maker, people don’t gather to honour you. So, it is what I remain grateful to Allah for.”

“So, what I will say briefly in all these 60 years is that my dream in life has always being to remain the same person to live by the values I set for myself, stand by those values and be ready to face the consequences.”

‘But if there is anything that I have to share with the younger generation especially that I now consider myself getting old is that the fears that we have are grossly unfounded. As Kingsley said when we started the banking reforms. On the eve of the banking reforms, every day, on the front pages of newspapers, the banks CEOs were at the Villa. They were the friends of the President, they were oligarchs, they were untouchables.”

“I remember when we started going after the bankers, someone called me and said, you know you are young man, you don’t know what you are doing, you will not succeed. What have we done today? So far, three or four of the wealthiest and powerful bank CEOs in this country have gone to jail and nothing happened.”

“You can fight any system, you don’t need a large number. People can have temporary powers to use but the truth will always prevail. So, when I was suspended as CBN Governor, I made a famous statement that you can suspend a man, but you cannot suspend the truth. And this is the truth that has come out.”

“As His Eminence, the Sultan of Sokoto said recently, this country has a problem. We cannot ignore the fact that things are not working. When you are in a society that is so abnormal, you cannot afford to be a conformist, because if you all conform things will not change.”

“Many years ago, when I was screaming about the billions being spent on fuel subsidy, I remember there was an attempt to arrack my house in Kano, then I was in the CBN. Where are we today? We are made to face reality. That fuel subsidy is unsustainable. Now when the decision is taken, it will be more painful than if they had removed it five or 10 years ago.”

“I only speak to the best of my understanding what I see about the country and I have paid the price, but Nigerians are the ones paying the real price. It is the price you see in increased poverty, it is a price you see in insecurity, in a high rate of inflation, in loss of values of our currency, in the numbers around malnutrition, unemployment, out of school children, maternal mortality and infant mortality.”

“Calling me controversial or calling me an enemy or critic, will not make those facts go away. So, anywhere we go, we must face these facts. Am I happy about it on my 60th birthday? No. Because, 60 years ago when I was born, the United State government advisory was telling investors that Nigeria has a better economic future than Japan. Today where are we and where is Japan? “

“It is not about one or two governments, it is about decades of a people throwing away opportunities and every time we are given a chance to make a change, we go back to the same old things.”

“And you know, when I have a platform like this, I have to talk. I have tried not to say much not because there is nothing to say or because I am afraid of speaking. The reason I have not spoken much in the last two years is that I don’t even have to say anything anymore, because all the things we were warning about have come.”

“Between 2014 and 2029, on the basis of this index of the purchasing power of the average income of an average Nigerian, we have wiped out all the progress made in 35 years. We have a responsibility as a people to rise and improve the lives of the people of this country.”

“It is no longer about government, political parties, traditional rulers, Emirs. The days are gone of saying one class of people whether they are Emirs or civil servants cannot talk. When there is a fire, everyone has to go with a bucket of water. We need to understand how our economy works as a people, we need to understand our choices. 70 per cent of our challenges in this country from insecurity to herder/farmer clashes, all have their roots in the economy. Even this shout about restructuring is about economics, it is about resources. We need to grow this economy and make it work for the poor people.”

“Since I am wearing two caps as an economist and an Islamic scholar, I need to say that, at the level of the North and Muslims, we need to look hard at ourselves and questions the choices we have made.”

“As Emir of Kano, we got scholars to sit for three years. We drafted a Muslim Code of Personal Status that began to address some of these issues. That law was ready in 2019, but it has not been passed.”

One thought on “Bombshell: Nigeria is a 40 years of waste, zero progress — Northern Emir”