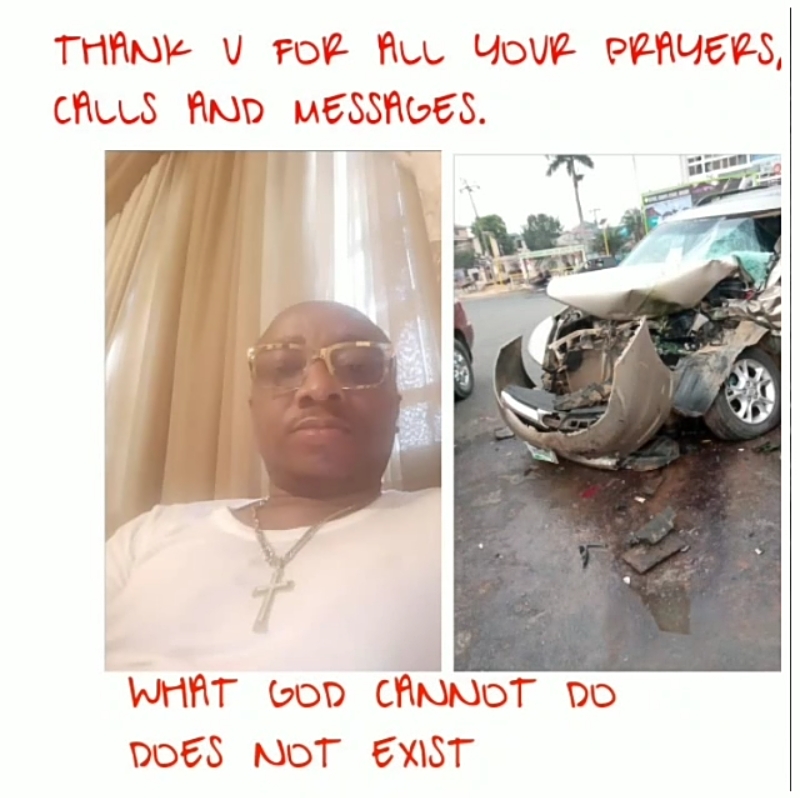 A renowned humanitarian, Pride of Arondizuogu and a Great Okigwe Son, an astute Economic / Finance expert and consultant in Imo State, High Chief Dr. Amb Ikenna Aniche (Nke Nke Enyi Izuogu Gburu Gburu 1–12 ) has in his usual magnanimity and benevolence asked the Tipper driver whose reckless driving nearly cost him his life a couple of weeks ago, when a head on collision ghastly accident that involved his 2011 Sienna and the tipper occurred at Government House Round About, Owerri to go in peace.

It could be recalled that the acident left Chief Aniche’s Sienna totally destroyed as he also suffered injuries and fractures which was miraculous to eye witnesses present at the scene of the accident hence nobody could believe the possibility of an ant and not to talk of a human being surviving such a mangled and carnage scene.

Chief Dr Aniche who is recuperating from the road mishap forced everyone into tears and shocked both imolites and the ill-fated Tipper Driver following his recent decision to set the Driver free and write off the bills incured as Medical bill and also directed the Driver to hold back the money expected of him to pay as his medical bills and replacement of the damaged 2011 Toyota Sienna.

At thier recent visit held to resolve matters arising from the unfortunate accident, Chief Dr Ikenna Aniche who was in his elements , full of gratitude to God Almighty for saving his life displayed uncommon spirit of forgiveness and gratitude to God when he surprised those present at the meeting with his total submission to God over what happened by declaring that the tipper driver should not shoulder any responsibility of paying his medical bills or buying new car as replacement over the unfortunate accident that destroyed his Vehicle , adding that it was the handiwork of God that he survived such a deadly accident that nobody would have believed that even an ant escaped from the carnage.

According to Chief Dr Aniche “My dear brother you came here for a supposed discussion on how to offset my Hospital bills and the purchase of a new car to replace my damaged vehicle but you forgot that no being that saw a mangled car like that will believe that an ant survived and came out alive. My incomparable, unmatchabe and awesomely awesome God and our heavenly guardians that kept me alive will not be happy with me if I take a kobo from you .Take your family members, friends and Children back and give back this #200,000 that is not up to 1% percent of my bill back to whoever you borrowed it from . The orthopaedic surgeon did not give me any bill, God did not look at my sins before keeping me alive. Why will I then ask you for money. God bless you all ”

Dr Aniche was sincere and did what nobody has ever done in the past and this development has elicited much reactions across aboard. Not a few are of the opinion that the Okigwe born humanitarian has in his usual manner set a standard and track record to pave way for attitudinal change that would address the proctacted social problem of malice and unforgiveness,especially as it affects accident victims and perpetrators .Everyone at the meeting was so glad for this uncommon show of love and magnanimity and prayed God to reward Nke Nke Enyi Izuogu.

3 thoughts on “BREAKING: NKE NKE ENYI IZUOGU GBURU GBURU 1 – 12 WHOLEHEARTEDLY FORGIVES CARELESS TIPPER DRIVER THAT HAD A HEAD ON COLLISION WITH HIM WHICH NEARLY TOOK HIS LIFE”