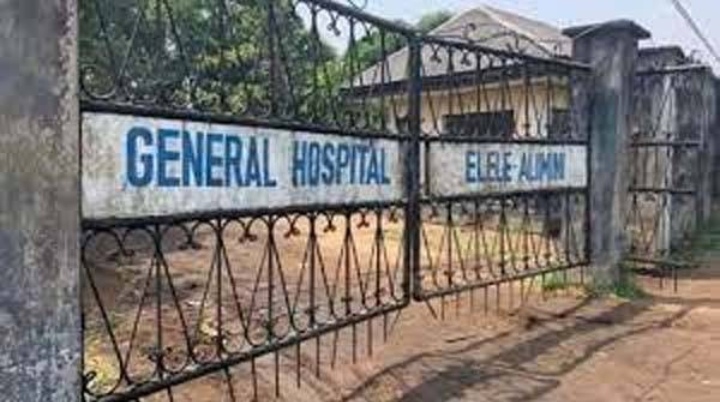 RESIDENTS of Elele-Alimini community, Emohua Local Government Area, Rivers State, are enraged that the Chairman of the area, Dr. Chidi Lloyd, declared recently, that the abandoned state government-owned general hospital in the community was being used to squirrel away corpses of kidnap victims without carrying out investigations.

Villagers, who spoke to NDV, said the chairman did not bother to inquire and corroborate his claim from leaders of the community before going public, maintaining that no criminal activity was perpetuated in the dilapidated facility.

Chairman of Emohua Local Government Area, Dr. Lloyd, had, penultimate week, announced a shocking discovery of an illegal mortuary in the community’s hospital, where kidnappers keep remains of victims who died in their hands.

Lloyd claimed that he and the council’s Taskforce on Illegal Bunkering, during its operation in Elele-Alimini community, uncovered an illegal mortuary in the abandoned state government -owned hospital.

Chief Press Secretary to the the chairman, Bright Jossy Elendu, in a statement, detailing the outcome of the operation accused chiefs in the community of complicity.

“The council chairman also intercepted an illegal mortuary where kidnap victims who died in the custody of their abductors are usually deposited inside Elele-Alimini General Hospital.

“Dr. Lloyd wondered why the leadership of Elele-Alimini allowed such atrocious business in the community, stressing that such evil activity cannot be going on without the involvement of the stakeholders in the community.

“Irked by the number of already decaying corpses deposited inside a particular building in the hospital, the council chairman ordered the security personnel to search the entire hospital, during which the syndicate and illegal occupant of the hospital were apprehended in their hideout,” his spokesperson asserted.

Elendu in a separate statement asked whether the Rivers State Ministry of Health and the leadership of Elele-Alimini community were aware of the existence of a mortuary inside the long-abandoned hospital.

“Has anybody in the host community (Elele-Alimini) ever deposited the corpse of their relatives in the said mortuary and subsequently taken same for burial?

“Has any motorcade or a single ambulance ever been sighted leaving the hospital premises with a corpse supposedly deposited in the mortuary to any funeral since the hospital is not functional? the council boss quizzed.

However, chiefs of the community said they were worried that the local government chairman did not carry out investigations before making allegations against them

When NDV visited the community, the chiefs holding their weekly Council of Chiefs’ meeting, expressed pleasure for the opportunity to tell their story.

Vice-Chairman of Elele-Alimini Council of Chiefs, Chief Chris Enyindah, said: “We have been very worried when this thing appeared in the news.

Elele-Alimini is a very peaceful community.

In fact, a lot of people regard Elele-Alimini as the Jerusalem of our country because nobody makes trouble here and we do not encourage trouble makers.

“Over the years, Alimini has received several awards for being a very peaceful community.

What happened in this case is that we have a general hospital and that hospital runs a mortuary section.

“We have called on government several times to come and reactivate the place, but to no avail.

The mortuary is not like every other equipment that you find in the office which can be removed easily.

“There are corpses there.

If you have a television in the office, you can remove it when you are leaving, same as table.

But the corpses that are there, you cannot remove them.

So, the corpses were kept there because the mortuary is functioning but when the hospital closed down, the mortuary section could not immediately close down.

“So members of the community have corpses of relatives still kept in that place.

Right now, there are six members of Elele-Alimini whose corpses are being preserved in that place.

The corpse of Mrs. John Felicia is there.

“Yes, there are other mortuaries around but since that one is functioning, people have no need of going to other places.

“The man who runs it, now runs it as a personal business and we are aware.

We have allowed him to provide that service to our community. We are using it.

That means it has never been used at any time by ritualists, cultists or kidnappers.

“The chiefs of the community had made several attempts to get the state government to rehabilitate the facility, but that their efforts have not yielded positively.

“It is on record that we presented it as a problem of our community to the governor when he visited to rehabilitate the place.

There have been promises, but up till today nothing has happened.

“There are corpses that have stayed there for like six years.

People have been coming to remove the corpses of their late relations.

People also have being taking new corpses to that place because they do not charge much like other mortuaries around, so people patronize them.

It is a government facility.

“We try to monitor what the man does there.

From time to time some of us have oversight function to supervise what he is doing.

Any person who made the announcement did not try to find out from the owners of the community, we would have told him the situation.

“We are aware that the mortuary is there and that the man is doing a genuine business.

It is genuine business that the man is doing there, nothing illegal is taking place there.

We are in touch with what is happening there.

“We visited there even after the chairman came, the people are back, but police are also monitoring what is happening there to make sure that what we are saying is true.

“The community from time to time goes to that hospital to clear the grasses and make it look clean.

That hospital is our baby. We are interested in that facility.

“It is an establishment that our people have benefitted from the time it was established in the 1950s when most of us were not born.

We take the hospital as our property, we do not want it to collapse ,which is why from time to time we go there to clean it up, hoping that one day, government’s attention will be drawn to the place.

“We are having a lot of challenges, particularly as it concerns health care.

We travel distances to attend other hospitals for the management of their health.

“We do not have anyone here, we go to Ahoada, Omoku and even Teaching Hospitals in Port Harcourt; there are people who cannot afford to travel the distance and it has affected health care here.

Some people die because of lack of healthcare.

Our people are suffering a lot,” he said.

Meantime, the Rivers State Ministry of Health with no Commissioner for Health at present, could not respond at press time as an official contacted by NDV, declined comment.

However, Commissioner of Police in the state, Mr. Friday Eboka, following the alarm by the council boss, Llyod, launched an investigation into the alleged mortuary, with the aim of unraveling the culprit and their sponsors.

Upon the conclusion of investigation, Eboka, disagreed with Lloyd over his claim that the mortuary was used by kidnappers in keeping their dead victims.

The police commissioner in a statement by the Acting Police Public Relations Officer of the command, DSP, Grace Iringe-Koko, said:” Preliminary investigation revealed that a mortuary actually exists in the premises of General Hospital, Elele Alimini, owned by the state government, which has, however, been abandoned and now moribund, following which the staff were all laid off over 10 ago.

“However, some mortuary attendants decided to stay back to attend to the corpses that were in the morgue to avoid an epidemic outbreak,” he police added.