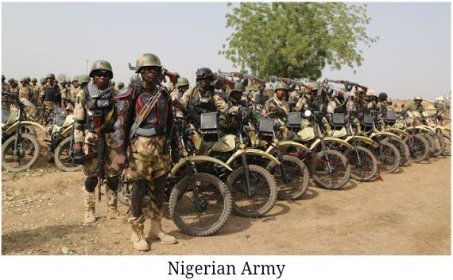 As at present, the Nigerian army is among the most equipped of all the land forces in Africa. It is also among the largest army in the world. It has been faced with numerous challenges in the recent past, especially the Boko Haram insurgency.

In retrospect, the Nigerian army was founded in 1900 and it was referred to as Royal West African Frontier Force then. They were trained by the British and also helped the British to fight the Second World War.

They fought in the Far East during the war. By the time the Nigerian civil war was ended, the Nigerian army had grown from just 18,000 to 126,000.

Many Nigerians think military men are paid heavily every month. The truth remains that the amount they are being paid is far below the manner of risk they go through every day of their lives in an attempt to protect Nigerian and Nigerians.

If you have been looking for information on how much the officers of the Nigerian army are being paid, you have come to the right source of information.

Have you read How Nigerians tackle unemployment?

A Lance Corporal on the other hand is paid about N55,000.

When he gets promoted to the rank of a Sergeant, he starts earning N63,000 per month.

On promotion to the rank of a Warrant Officer, he will be paid N80,000 per month.

Next rank is that of a Master Warrant Officer. He on the other hand is paid N90,000.

The lowest rank in the Nigerian army is that of a Second Lieutenant. He receives about N165,000 every month. The next rank is the Lieutenant.

Lieutenants in the Nigerian army are paid N180,000.

The next rank is that of a Major and he receives N300,000 every month as take home pay.

A Major gets promoted to the rank of a Lt. Colonel and he starts receiving N350,000 every month.

When he moves to the rank of a Colonel, which is the next rank after a Lieutenant Colonel, he starts receiving N550,000.

A Colonel will be promoted to the rank of a Brigadier General next. At this rank, he will be paid N750,000 every month.

A Brigadier General gets promoted to the rank of a Major General and he starts taking home up to N950,000 every month.

The next rank after Major General is that of a Lt. General and this shoots his salary up to N1 million.

Then the military officer finally gets uplifted to the rank of a full General, he starts receiving N1.5 million every month.