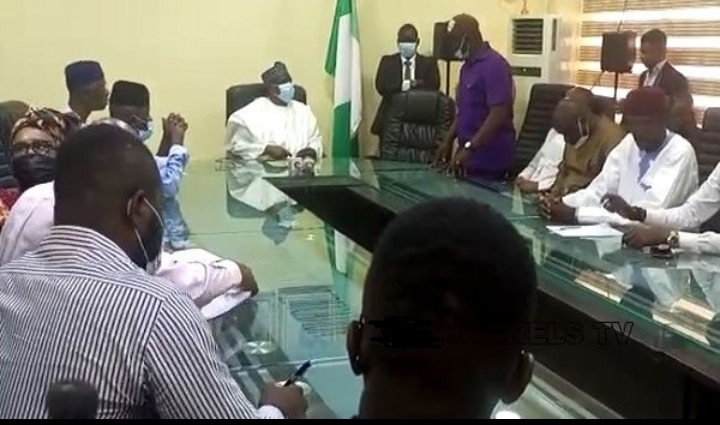 Shocking: Education Minister runs out of meeting with students

Adamu storms out of meeting with NANS after students’ attack

Education Minister Adamu Adamu yesterday stormed out of a meeting with the leadership of the National Association of Nigerian Students (NANS) at the ministry’s conference room in Abuja.

This happened when the students accused government officials of leaving the Education sector in a mess while they sent their children to study abroad.

Adamu had scheduled an impromptu meeting with the leadership of NANS, who barricaded the entrance to the ministry while protesting the one-month warning strike declared by the Academic Staff Union of Universities (ASUU) leadership.

Trouble started when the students asked Adamu to vacate his office since he could not resolve the crisis between the union and the government.

The minister, who was unhappy about the students’ attacks, said he was “disappointed with their comments” and stepped out of the meeting.

The Joint Admissions and Matriculation Board (JAMB) Registrar, Prof. Is-haq Oloyede, and Executive Secretary of the National Universities Commission (NUC), Prof. Abubakar Rasheed, attended the meeting with the minister.

This strike has been affecting our lives since 1999 and Nigerian students want to be part of the discussion between the Federal Government and ASUU to find a lasting solution to the matter.

“We want the Federal Government and ASUU to, as a matter of urgency, call off this strike while negotiation continues.

We want to go back to the classroom.

If not, this will be more than the #EndSARS protest.”

The students had staged a protest from the National Assembly to the Federal Ministry of Education, calling for an immediate end to the ASUU strike.

The angry students, who barricaded the entrance of the ministry while brandishing placards with various inscriptions, urged the government to listen to their cries and settle ASUU.

Asefon accused Nigerian leaders, most of whom enjoyed free, quality education in the First and Second Republics, of punishing the current generation with disruptions in the education system.

In Kano, the students who carried placards with different inscriptions, went round the metropolis, expressing their displeasure over the strike.

In Ibadan, students, under the aegis of B Zone of NANS, threatened to barricade all Federal roads in the region as from today, should the strike persist.

In Yola, protesting students from across Adamawa State said they were tired of having disruptions in their academic calendars.

They blocked the long Jimeta Bridge, which links Yola North Local Government Area with Girei, where the Modibbo Adama University (MAU) is located.

In Jos, NANS Public Relations Officer (PRO) for Zone C, Na’allah Nanzim said the protest was meant to tell the government and ASUU that education is the right of every Nigerian child, hence the need for them to resolve the protracted disagreement.

2 thoughts on “Shocking: Education Minister runs out of meeting with students”