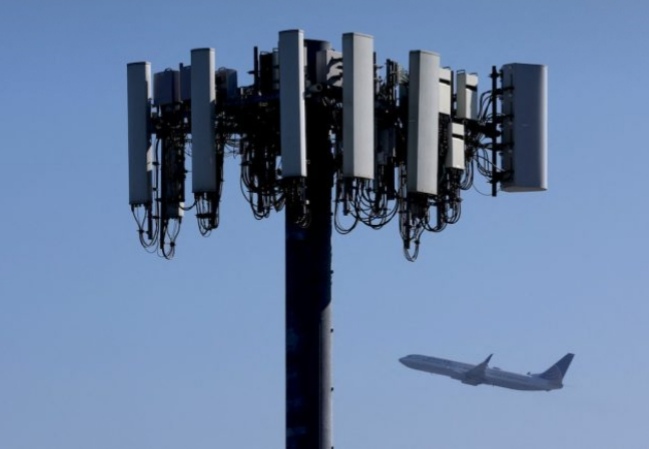 Telecoms: 5G launches in US without huge impact on flights

A United Airlines plane flies by a cellular tower as it takes off from San Francisco International Airport on January 19, 2022, in San Francisco, California.

Telecom giants AT&T and Verizon began 5G service in the United States Wednesday without major disruptions to flights after the launch of the new wireless technology was scaled back.

The firms spent tens of billions of dollars to obtain 5G licenses last year, but aviation industry groups have raised concerns about possible interference with airplanes’ radio altimeters, which can operate at the same frequencies and are vital for landing at night or in bad weather.

Both AT&T and Verizon this week agreed to scale back the launch of 5G near airports following an outcry from US airlines, who had warned the roll-out would cause mass disruptions.

Despite the scaling back, a handful of international carriers cut flights to the United States from their schedules Wednesday, but there were no mass cancellations and some companies planned to resume service the following day.

By early morning local time Thursday, 473 flights through US airports had been cancelled, according to tracking website FlightAware, down from last week when there were no major disruptions.

Airlines that cut Wednesday flights included Air India, ANA and Japan Airlines, though all three said they would restore routes the following day.

“Our Delhi to JFK flight left this morning at 7 AM (0130 GMT),” Air India’s spokesman said, adding it would also be operating flights to San Francisco and Chicago.

ANA and Japan Airlines also said they were restoring service on Thursday after assurances from regulators at Washington’s Federal Aviation Administration (FAA).

“As the launch of the 5G service in the US has now been partially postponed, operation of ANA flights from January 20 will follow the normal schedule,” ANA President Yuji Hirako said in a statement.

The FAA said Wednesday that it has now approved 62 percent of the US commercial fleet to perform low-visibility landings at airports with 5G — up from the 45 percent on Sunday.

“Even with these approvals, flights at some airports may still be affected,” the agency said.

“The FAA also continues to work with manufacturers to understand how radar altimeter data is used in other flight control systems.

Passengers should check with their airlines for latest flight schedules.”

2 thoughts on “Telecoms: 5G launches in US without huge impact on flights”

Woman Delivered Of Baby Boy During Flight From Ghana To US   A pregnant woman has been safely delivered of...

The Taliban killed eight resistance fighters from a national opposition group in a firefight in the north of Afghanistan,

The Benin Bronze returned to Nigeria by the University of Aberdeen

As our new brand starts showing up in our products, I hope people around the world come to know the Meta brand and the future we stand for

According to Google, the week-long virtual event will provide an opportunity for journalists, publishers, and content creators in Africa to find out more about Google’s training programmes.

When Flubot infects a device, it can result in incalculable financial losses. Additionally, the malware creates a backdoor which grants access to the user’s device, thus enabling the invader or attacker to perform other criminal actions, including launching other variants of malware.