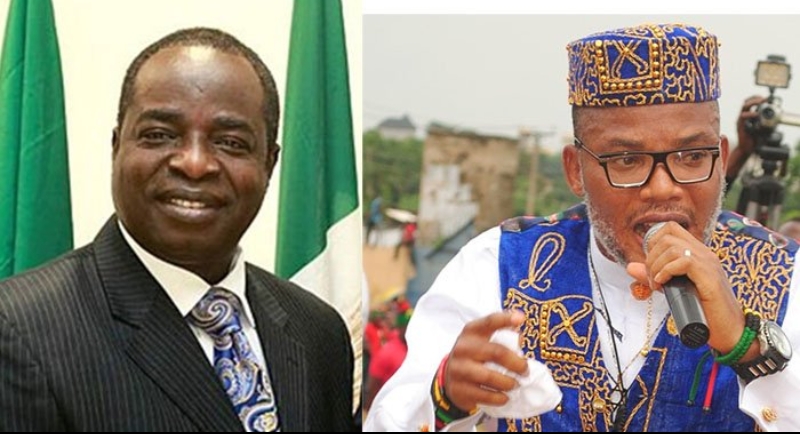 As the trial of leader of the proscribed Indigenous People of Biafra, Nnamdi Kanu, resumes on Monday, a former federal legislator who authored and co-sponsored the Terrorism Act Amendment Bill of 2013, Kayode Oladele, has called for a procedure which disallows those charged with terrorist acts from using their trials as a propaganda platform.

Kanu’s arrest from an unknown location and his extradition to Nigeria was announced on June 27 by the country’s Attorney General, Abubakar Malami.

The News Agency of Nigeria reports that the IPOB leader was consequently arraigned before Justice Binta Nyako of the Federal High Court, Abuja, amidst tight security on June 29.

The case was subsequently adjourned till July 26.

Oladele, a former Chairman of the House Committee on Financial Crimes in the Eighth Assembly, however, canvassed the need for a closed trial of terrorists.

He advised the Federal Government to embrace secrecy in court terrorism trials, being the model used by several Western nations.

According to him, acts of terrorism are tantamount to acts of war.

The former lawmaker stated this in a five-page article entitled: “Terrosim Trials: An Overview of the Delicate Balance between National Security and Human Rights.”

Have you read? Nnamdi Kanu to resume his 2017 trial tomorrow- Lawyer

The lawmaker said all terrorism trials anywhere in the world by their nature were always full of intricacies which involved several difficult legal issues bordering on procedure, conflict of laws including the protection of witnesses, issues of disclosure and the use of sensitive evidence during trials.

The legal practitioner also advised the government to adopt secrecy in the process, maintaining that this had been the common practice globally.

“Section 31(3) of the 2011 Act provides that the court may, on motion by or on behalf of the prosecuting agency, in the interest of public safety or order, exclude from proceedings instituted for any offence under this Act, any person other than the parties and their legal representatives.

“Surprisingly, the 2011 Terrorism Act did not create a separate court for the trial of terrorists.

“The jurisdiction is still vested in the Federal High Court, which, presumably, is expected to use the same procedure used for the prosecution of other criminal cases in terrorism trials, a significant departure from what is obtainable in several other jurisdictions where in addition to secret trials, separate courts such as Military Tribunals are usually used for the trial of terrorism cases.”

He also quoted Section 30 of the 2011 Act as giving the Attorney-General of the Federation the general powers to institute and undertake criminal proceedings on behalf of the Federal Government of Nigeria even though he may “delegate his power to any agency charged with responsibility of terrorists investigation to institute criminal proceedings against any person in respect of offences categorised” in the Act, ” which he put forward as empowering the government to justify to mode of the proceedings. ”

“Realising that acts of terrorism are tantamount to acts of war, several Western nations including the United States and United Kingdom not only try most terrorism cases secretly by Special Tribunals, they also sometimes adopt special procedures in order to protect national security, public interest and also “achieve a high rate of conviction that would not be achievable in the regular courts, where “due process” is diligently pursued.

“In the trial of terrorists, therefore, the focus is mainly about “dispensing military justice attendant to a military conflict”, not necessarily (though important), the protection of the fundamental rights of the terrorists,” he said.

One thought on “Give Nnamdi Kanu a closed trial – Ex-Lawmaker”