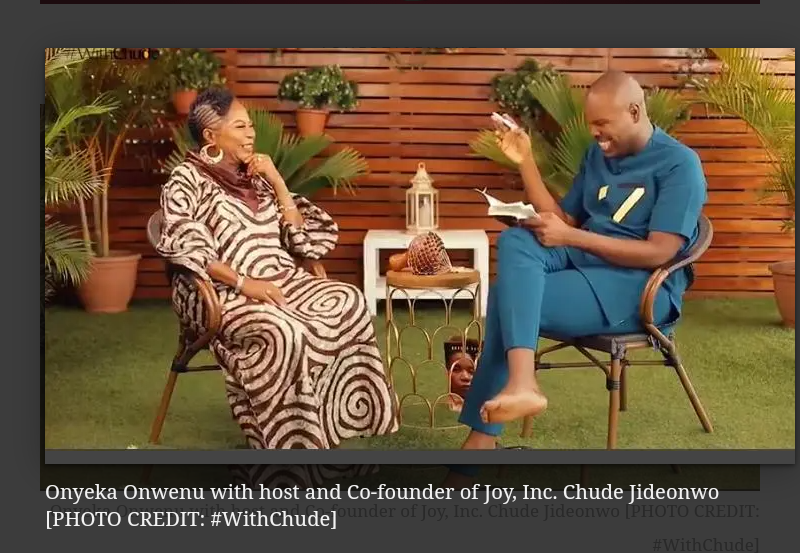 I was accused of having affairs with Obasanjo, Sunny Ade, Fela – Onyeka Onwenu

Onyeka Onwenu revealed that there was an element of truth in one of the rumours but the romantic interest was not from her end.

Being in the eye of the public sometimes comes with unfounded backlashes. For the iconic Nigerian singer, actor, journalist, broadcaster, and author, Onyeka Onwenu, it was tales of affairs with prominent Nigerians.

In a recent episode of #WithChude, Ms Onwenu discussed her love life and the many rumours spun about her during her career with host and Co-founder of Joy, Inc. Chude Jideonwo.

‘WithChude’, is a special series of targeted multimedia conversations and investigations focused on narratives that enable and strengthen the mind, heart, and spirit.

“They even said President Obasanjo married me. Obasanjo asked me about the rumour and we had a good laugh about it. Somebody had asked me that question four times, and by the fifth time I was ready to fight him to leave me alone. If he [Obasanjo] was going to marry me, then we’d make it public, why would I hide it,” she disclosed.

The speculations, however, did not end there. There were many stories about her having some of the greatest Nigerian singers of all time, including Fela Anikulapo-Kuti, King Sunny Ade and Sunny Okosun, as love interests. For the singer and journalist, this was quite a lot to handle.

“A lot of times, I actually refused to address those questions,” she stated.

During the interview, Ms Onwenu revealed that there was an element of truth in one of the rumours but the romantic interest was not from her end.

According to her, of all the men she was linked with, only Fela showed romantic interest in her and asked for her hand in marriage. However, she declined the Afrobeat Legend’s marriage proposal.

Revealing more details about this proposal, she said, “Fela was a trickster, he knew I would say no. He had a bet with someone, that person is Dede Mabiaku. He told Dede I was going to run.”

She further disclosed that Fela’s proposal might have been his way of thanking her for standing up for him when he was charged with money laundering and jailed by the Federal Government.

Speaking about her defence for him, she said, “I took a chance writing that widely read an article in his favour. I said why arrest him for the money he has earned? ‘He’s taking his band outside and he’s going to pay for their hotel, this is so wrong’ and some people said ‘go and arrest her’. It was Idiagbon who said ‘no, leave that woman alone, she loves Nigeria.’”

MARRIAGE
She also shared how she summed up the courage to leave her previous marriage, find love again and restore her relationship with God.

After years of marital bliss with her now ex-husband, she said her marriage began to turn sour and abusive. She said she endured it all out of love for him (her ex-husband) and their children.

In her words, “The marriage was incredible. It was incredibly perfect. He was a very good friend. But sometimes when things happen to people, they change, and instead of taking it out on the people who have caused the problem, it is expedient to take it out on the people closest to you. That happened. Why did I take it for so long? Because I loved him. And I loved my children. And my children loved their father.”

Speaking about how she finally made the decision to leave, she disclosed that she began to realise that love, sometimes, required walking away, especially in an abusive situation like hers.

“You make sacrifices because of the family. But there comes a time when you have to say ‘I’ve done enough’, and if you really care about your children, you save yourself. Because it could have killed me,” she said. o

LOVE AGAIN
In spite of all she went through, Onyeka didn’t give up on love just yet. She revealed that her new heartthrob was a childhood crush with whom she reconnected much later.

Sharing bits of her love life, she stated, “The love that I share with this man started when I was 13 years old. This man loved me, knew me, built me up, and told me who I was before I knew who I was…You don’t meet people like him all the time, he’s just very special.”

She said, “You don’t meet people like him all the time, he’s just very special. The love that I share with this man started when I was 13 years old. But I don’t think we were meant to be together and we went our separate ways. We could have married but I wasn’t ready. And then we lost touch. We met up again somehow – everything happened by serendipity. It’s by chance.”

When asked about what has kept her going despite her ordeals, Onyeaka revealed that her faith in God had prevented her from being held bound by loneliness and depression.

Many years later, Onwenu said she remains unapologetic about her spirituality and it will continue to form the bedrock of her future accomplishments.

Onwenu released her autobiography ‘My Father’s Daughter’ in 2020.

It chronicled her life as a musician, activist, wife, mother, and politician. In the book, she also shared her formative contact with feminism, and how her late father’s life heavily influenced her decision to join politics is deftly explored.

It marked the first time, the celebrated singer would reveal details of her personal life to the public.

One thought on “Onyeka Onwenu Reveals: My affairs with Obasanjo, Fela and Sunny Ade”