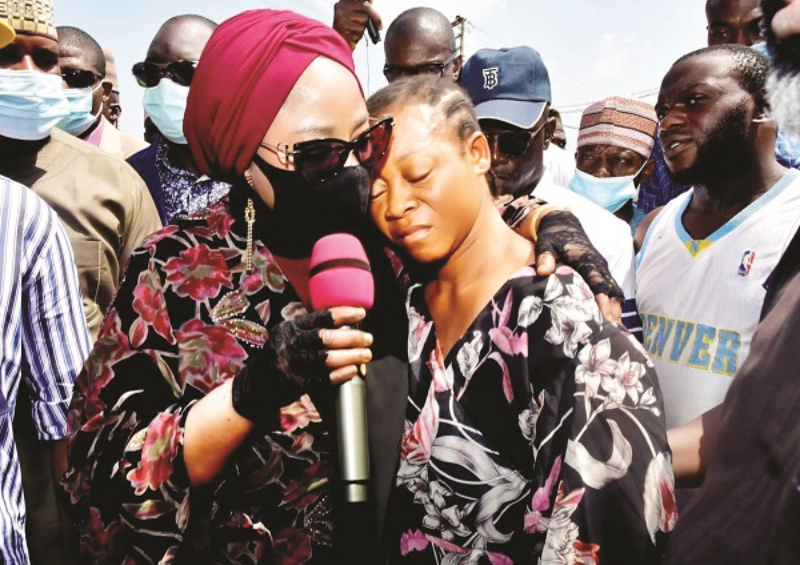 Two sisters were among the five persons who lost their lives in the Friday night fire that broke out at Kubwa Village Market in the Federal Capital Territory (FCT),their father, Fidelis Obinna, said yesterday.

Obinna gave their names as Chioma and Angel.

The victims’ mother is currently hospitalised, he said.

Obinna said the fire was preceded by a bang, result of a kerosene tank explosion.

He said there was total blackout in the area when the accident occurred.

“There was no power supply; no cooking or frying around, but all we heard was an explosion,” he said.

“I lost two of my daughters, Chioma and Angel to the fire.

“My wife sells foodstuffs around here and she is now hospitalised at the National Hospital, Abuja, with serious burns.

“The doctor told us nothing would happen to my wife, but that the injuries were too much; it’s all over her body except her breasts.”

A trader, Mrs. Obilor Chidinma, who lost her 16 years old son and a daughter who is still in critical condition was taken to Kubwa General Hospital on the order of the FCT Minister of State.

Another victim, Queen Bulus, who sustained injuries, said she got burnt when an overhead electricity cable fell on her hand.

“I was sitting and selling plantain, then the wires sparked and suddenly one of the wires from the electricity poles cut and burnt me.

“All I could remember was that I ran away through the back to my house and left everything I was selling which later burnt to ashes.

“My mother took me to the hospital and I thank God I was attended to in good time,’’ she said.

Any eyewitness, Aliyu Ibrahim, said that many people were burnt, but a hospital initially refused to attend to a survivor because no police official accompanied the victim and his rescuers.

“The patient was taken to three different hospitals but was refused treatment initially,’’ he said.

Another eyewitness, Chukwudi Agu, commended the timely response of the Fire Services and those of security agencies in the area.

“The Fire Service really did well because if not for them, all the buildings here would have gone down as the level of fire here was intense.

“I really thank God they responded on time unlike in the past because I have never seen them perform that way. I give kudos to them,’’ he said.

Meanwhile, a family member of one of the hospitalised victims approached the Bwari Area Council Chairman, Mr John Gabaya, and requested for his intervention in the medical treatment of her young boy.

She complained that Garki Hospital had placed the boy on admission and was requesting for N500,000 to begin treatment.

The chairman who was at the scene, ordered one of his aides to go with the woman to the hospital to take care of all that was needed to ensure the proper treatment of the child.

His words: “Five people died while 11 people were injured. Out of the 11, five were critical and four were transferred to the National Hospital. Eight shops were affected. But we are yet to determine the extent of the loss. Four children of the same family were part of those injured and a pregnant woman.”

Preliminary investigations, according to the police, however revealed that two shops in the market were affected in the fire incident following a kerosene surface tank explosion.

A statement issued on Saturday by the FCT Police Public Relations Officer, Josephine Adah, said: “Unfortunately, the remains of five persons already burnt beyond recognition were evacuated from the scene by the rescue team and taken to the hospital where they were confirmed dead while ten (10) others who were seriously injured were immediately taken to the hospital.

”The Commissioner of Police, FCT, CP Babaji Sunday, who described the incident as unfortunate, has ordered a discrete investigation into the incident. The CP noted that operatives from the Forensic Section of the Command Criminal Investigations Department have also been deployed to the scene for forensic analysis to unravel the cause of the incident and more importantly provide recommendations to prevent a reoccurrence of such incident.

“The CP commiserated with the families of the victims. He noted that the inferno was under control and commended the people who were at the scene at the time for supporting in the rescue operation and general control of the fire.”

Aliyu sympathised with victims of Kubwa Market fire incident that claimed no fewer than 5 lives.

Also, it was gathered that about 10 people who sustained various degrees of injuries are receiving treatment in Kubwa General Hospital and National Hospital respectively.

The minister visited the scene alongside the FCT Director of Fire Service, Malam Sani Sa’idu, among other top management staff of FCT Emergency Management Agency.

While commending the FCT Fire Service and other critical stakeholders for their proactive steps, the minister lamented the high rate of casualties recorded, even as she expressed concern over frequent fire outbreaks in major markets across the territory.

would be directed to remove all shanties along the road corridors to pave way for emergency operations.

“First, I want to on behalf of the FCT Administration and Mr. President sympathize with the families of those who lost their beloved ones in this unfortunate fire outbreak. However, it is regrettable that six persons have been confirmed dead despite the proactive steps taken by FCT Fire Service.

“But I want to appeal to our residents to be law abiding when government make policy statement on certain issues. Before now, government has warned residents not to sell kerosene, diesel or any inflammable chemicals in unauthorized areas. Abuja is a planned city and there are designated areas marked out for such trade.

”I will direct the Development Control to come here and remove all the shanties that blocked the access road leading to the market. I was told that fire fighters found it difficult to even access here due to illegal structures and shanties. All these will be removed by next week and I want you to show understanding in carrying out this exercise,” Aliyu affirmed.