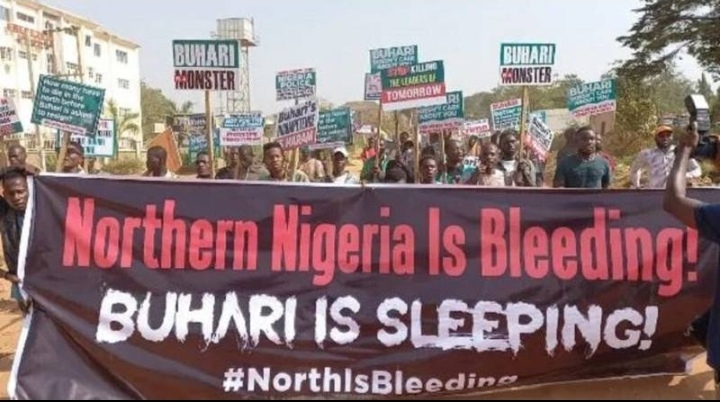 NorthIsBleeding protesters in Abuja
The #NorthIsBleeding protest, organised against the backdrop of unending insecurity and killings ravaging states in the North, reached the Federal Capital Territory, Abuja at the weekend, an indication that the people are thoroughly frustrated with the prevailing situation and would want their leaders to act immediately.

It all began a week ago, when some Nigerians from the Northern part of the country suddenly began to use micro-blogging platforms and social networking services to protest government’s failure to combat increasing insecurity in the region.

The protests had developed from Kano and a few other Northern states before spreading to the FCT.

Remarkably, the #NorthIsBleeding protest is a sharp departure from the usual solidarity gatherings for President Muhammadu Buhari which many people routinely embarked upon in recent years.

Also read: Landlords raise the alarm over conversion of Abuja houses to hotels

Though seemingly out of character coming from the North, the popular impression is that the protest is a genuine expression of anguish, suffering and death which have become a sad reality in the North.

It is the writhing pangs of a dying animal caught in the vortex of unending violence.

Unfortunately, Southern Nigeria is bleeding too. The irony of it is that while the South had mounted protests against insecurity, the North had until now passed votes of confidence on the Federal Government.

The #EndSARS protests against police brutality in the South which some elements in the North opposed and interpreted as designed to remove President Buhari from office, is a strong case in point.

But the #NorthIsBleeding protest is a different phase of this trend and sends a powerful message that the country is indeed bleeding, and that something needs to be done urgently about it.

In view of the emerging consensus between the North and the South that Nigeria is bleeding, it may be safe to say that the country would not have become a theatre of violence and insecurity it is today, if both sides had joined hands and stamped their feet on the ground to reject wanton bloodshed, regardless of who was in power.

It is imperative for the North and the South not only to work together, but also to reject a life in perpetual fear, violence and bloodshed.

Those are ill-winds that blow nobody any good.

To live in unity in pursuit of development and progress for all, it is paramount to have peace and security of lives and property.

What #NorthisBleeding Protest means is that the South must also rise again and speak, this time in unison with the North, and demand that government gets more serious in providing security for citizens by eliminating or curtailing criminality in all its ramifications.

If the people are united in demanding good governance and security of lives and property, government would have no choice than to deliver them to the people, or risk being shown the way out of power in the next election.