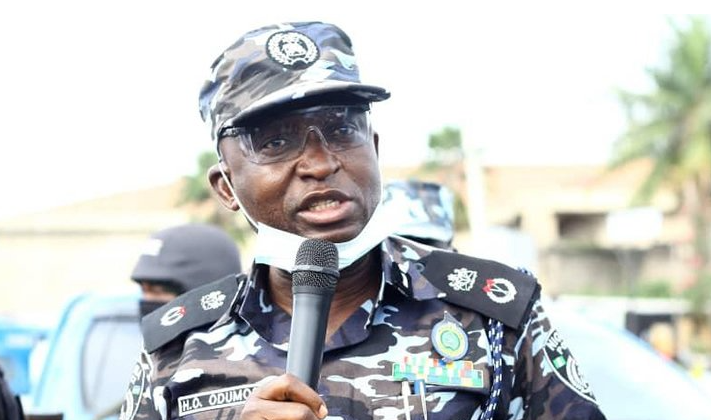 Security operatives, including police, soldiers and others have surrounded the Lekki tollgate plaza.

This is coming hours to the first anniversary of #EndSARS nationwide protests.

Youths in the country are preparing to commemorate the first anniversary of EndSARS, a protest movement against police brutality that rocked major cities in the country.

Try and read this too👉 US confirms Boko Haram, bandits working together to blackmail Buhari regime

The protests came to a grinding halt after October 20, 2020, the date of a brutal crackdown on peaceful protesters at the Lekki tollgate, the epicentre of the demonstrations.

#EndSARS was first a campaign to end the Special Anti-Robbery Squad unit, notorious for extortion, torture and extrajudicial killings.

After it snowballed into wider protests against bad governance, the authorities suspended the unit and promised reforms.

But the youth were sceptical and continued to protest – until the Lekki shootings.

Police spokesperson, Adekunle Ajisebutu, in a statement titled, ‘#EndSARS anniversary: No streets protests in Lagos’, said there may be a breakdown of law and order if the protests are allowed to hold.

The statement read, “The police will only allow an indoor and virtual event in commemoration of the EndSARS anniversary and will provide adequate security at the venue (s) if known. This is in recognition of rights of every Nigerian to express his or her interest.

“We wish we could permit such street protests. However, intelligence at our disposal has revealed plans by some faceless groups or individuals to stage an anti-EndSARS anniversary protest in the state the same day.

“In view of the conflicting interest between the pro and anti- EndSARS anniversary groups and threat to cause mayhem, the Command once again warns both groups against any form of street protest between now and 20th October, 2021 and beyond.

“It is acknowledged that citizens have the right to peaceful protests. However, in this instance having carried out a critical security assessment and intelligence report at the disposal of the Lagos Command in respect of the planned protests and attendant implications on public safety, the Command considers it inappropriate to allow such protests to hold. It will not stand aloof and allow the breakdown of law and order which the protests may cause.

“To avoid a recurrence of the gory protests of last year during which some innocent Nigerians including police officers were gruesomely murdered, private and public property plundered and maliciously destroyed, the police will not abdicate their responsibilities of protection of lives and property by allowing such avoidable incident happen again in the state

“Therefore, in the interest of security and public safety, the Commissioner of Police, CP Hakeem Odumosu, wishes to warn the organisers of the protests that the police will deploy all legitimate means to stop or neutralise the planned protests.”