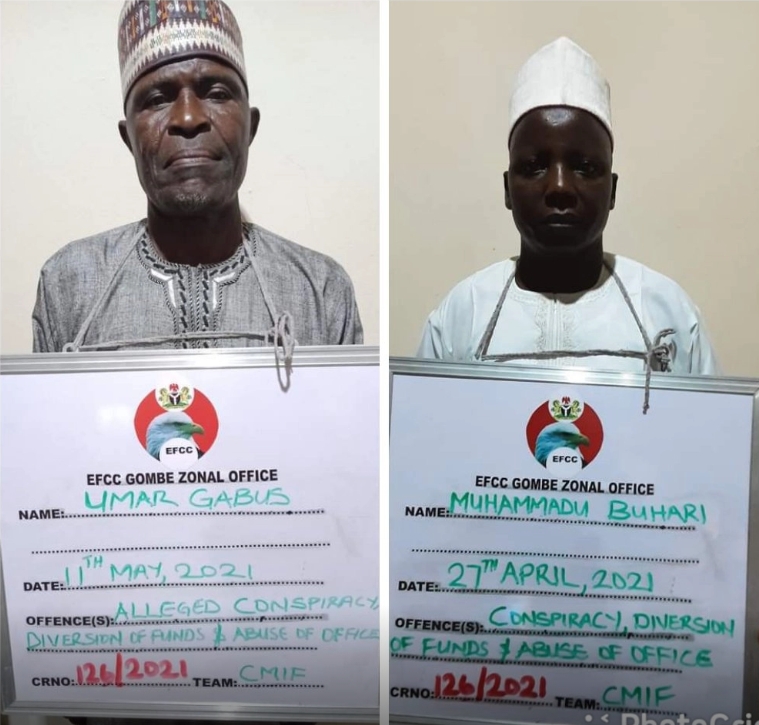 The Gombe Zonal Command of the Economic and Financial Crimes Commission, EFCC has secured the conviction of two former staff of the Finance Department of Gombe Ministry of Finance, Muhammadu Buhari and Umaru Gabus before Justices S.Y.Abubakar and Fatima Yusuf of State High Court, Gombe for failure to report to the Commission or the Police, a cumulative gratification of N8, 750.000 (Eight Million, Seven Hundred and Fifty Thousands Naira).

The Offence is contrary to Section 23 (1) and punishable under Section 23(3) of the Corrupt Practices and Other Related Offences Act (2000).

Also read: Meet man with the second largest pen!s in the world

Mohammadu Buhari pleaded guilty to the charge against him and was convicted and sentenced to one-year imprisonment with an option of a fine of N20, 000.00. He was also ordered to restitute the sum of N700, 000.00 to the Printing Workers Association of Nigeria, Gombe State Branch through the Commission.

Investigation revealed that the convicts sometimes between November 2014 and January 2017 were offered gratifications to add more fake names on the Printing Union Platform to enable the Union to collect more dues from the Gombe State Government.

It was discovered that when the excess funds were collected it was shared among them.

One thought on “Breaking: Mohammadu Buhari arrested by EFCC with Umaru Gabus”