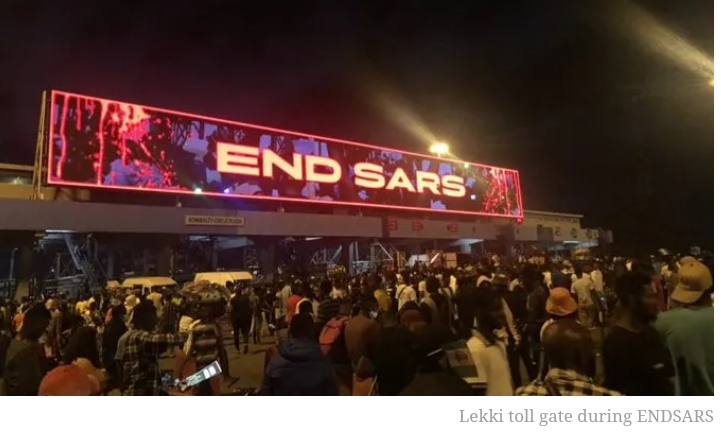 Popular rapper, Folarin Falana popularly known as Falz and other celebrities have called for the next line of action following the report of the Panel of Investigation set by the Lagos State Government to unravel the incidents of October 20, 2020, at the popular Lekki Toll Gate.

The recent report released had indicted the police and soldiers of the Nigerian Army of having killed and maimed unarmed youths protesting police brutality and bad governance in Nigeria.

But Minister of Information, Lai Mohammed, had in a series of press conferences denied the massacre, insisting that no one was killed when soldiers invaded Lekki toll gate.

Despite the Federal Government’s stance, the report shows obvious evidence that there was indeed a massacre at the Lekki tollgate.

His post read: “I can’t believe these monsters made us think that we are mad sha. Something that we watched on Instagram live.

“Anyway the panel is out now and it is clear as day just in case you thought we would back down at some point. This has never been and will never be an option.

“All these recommendations must be implemented. the leader these innocent souls deserve is justice.”

Other celebrities have taken to their social media pages expressing their opinions following the panel report.

The likes of Mr Macaroni, Timi Dakolo and Toolz were impressed with the report by the panel unveiling the truth of the protest.

Here are their comments:

@Mr Macaroni “ The same panel that the government set up has presented their findings. Except you people don’t have faith in your own Judicial system. Since last year, we have seen numerous gaslighting and lies! The truth always prevails and that truth is the #EndSARS Movement.”

@Timi Dakolo “Now that the Panel is done with their findings and has declared it a massacre, what next? WHAT NEXT?!

@Toolz “I honestly was expecting a different outcome from the #LekkiMassacre judicial panel, but glad the truth prevailed.”

@Kate Henshaw “There was a LIVE recording of the incident but they legit tried to make it seem like we were mad! Who dey mad now?

One thought on “ENDSARS Report: Celebrities declare next line of action”