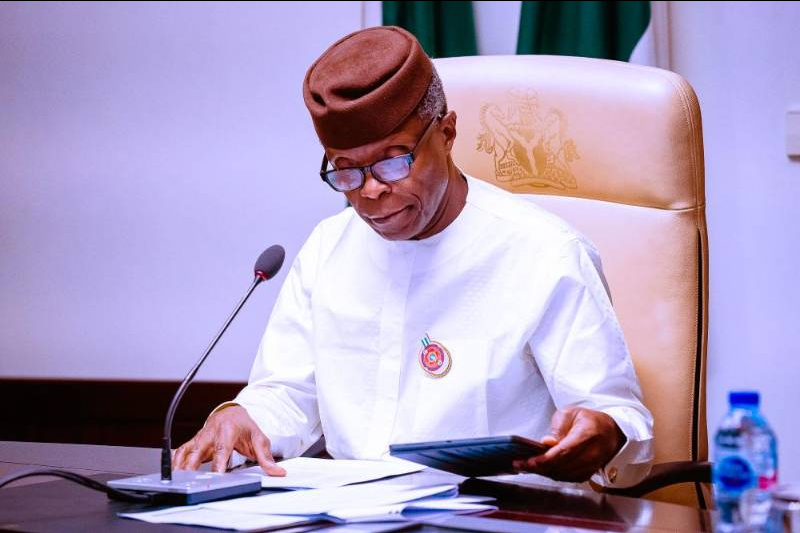 FMBN: Civil servants ought to own their own homes

Vice President Yemi Osinbajo, says every civil servant deserves to own a home; hence the need to reform the Nigerian Civil Service.

Osinbajo’s spokesman, Laolu Akande, in a statement on Friday, said the vice president spoke after receiving a briefing on the Federal Civil Service Strategy and Implementation Plan 2021-2025 at the Presidential Villa, Abuja.

The presentation was made by the Head of the Civil Service of the Federation, Dr Folashade Yemi-Esan.

The meeting is a presidential level briefing of the reform process of the Federal Civil Service which has been on since 2017.

The reform is being led by Steering and Implementation Committees with membership drawn from the public and private sectors with the engagement of development partners.

According to Osinbajo, there is need to do something bold and big that will make a difference.

“It is evident that perhaps, for the first time in a long time, some very serious attention is being paid to all of the various issues in our civil service.

“I think that we should really do something that is bold, big and that will really make the difference in order to address some of the issues especially that of accommodation for civil servants.

“We can do much more with mass housing; we have a target now of 300,000 houses under our Economic Sustainability Plan (ESP) social housing scheme.

“CBN has allocated N200 billion, but we have seen that we can provide mass housing, and we can make civil servants beneficiaries of the scheme.”

He said though the housing scheme was very modest, it was the kind of thing that could at least be done to begin to take into account, the fact that everybody who worked for the civil service deserves to live in their own home.

Osinbajo said that there must be a strategy for giving everybody a place to live in.

“It is a vital part of what we are trying to do; we must address it.

“A civil servant ought to be able to own a home, and justify to his family the reason why he went for the job,” he said.

Citing his experience while serving as Attorney General in Lagos State, Osinbajo said reforming the Lagos State Judiciary was done like fixing the welfare of federal civil servants. This was key to addressing challenges associated with productivity and corruption.

Yemi-Esan also presented a report on the implementation status of the Federal Civil Service Strategy Plan 2017-2021.

She identified staff welfare, particularly remuneration and housing, as areas that require better focus and urgent intervention by the Federal Government.

The head of service appealed for improved support, particularly in funding the implementation of successive strategy and implementation plans to overhaul the service for better productivity.

Yemi-Esan said the current reform in the Federal Civil Service had enabled government to save huge sums through the verification of personnel payroll and digitization of some operations, among others.

She said that her office would continue to lead the reform process as the 2021-2025 plan went forward to the Federal Executive Council for approval.

The meeting featured comments and observations on the proposed plan tabled on behalf of the Steering Committee, chaired by the Head of Service.

In attendance at the meeting were the Attorney General of the Federation, Mr Abubakar Malami, Ministers of Labour and Employment, Dr Chris Ngige, and Finance, Budget and National Planning, Mrs Zainab Ahmed.

Others were Ministers of State for Budget and National Planning, Prince Clem-Agba, and Works and Housing, Engr. Abubakar Aliyu.