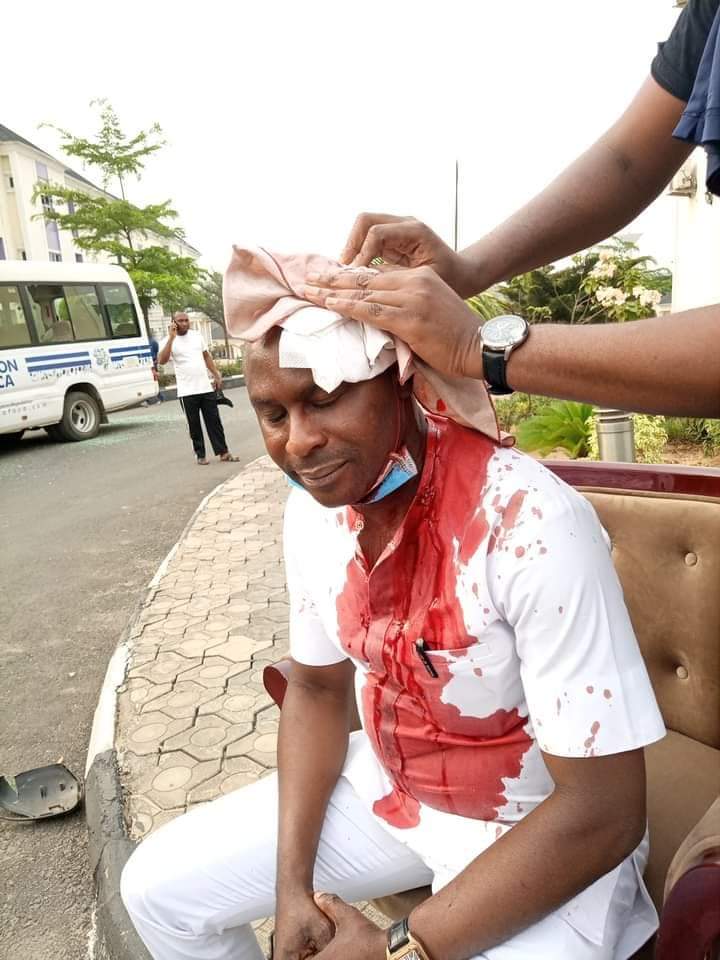 The Shameful Disgrace of Rochas Okorocha

— If your boss is treated by Uzodinma’s aide as common criminal, your own case will be sorry.

Senator Rochas Okorocha should trade carefully. As a Governor, he was Lord unto himself. He raped Imo common wealth and properties without condom. I shouted to high heaven questioning the brazen embezzlement of Imo patrimony, and abuse of office, but was attacked left, right, centre, until I was forced on exile. Okorocha forget that power is transient .

Okorocha, his family and cronies converted all Imo lands, green verge and open space into private properties. Imo government building and infrastructures were shamelessly converted to Okorocha and family inheritance.

Any opposing view will be melt with force, attacked or blackmailed to submission by the Okorocha’s army of thugs and media urchins.

Federal allocation to Imo State and internally generated revenue were diverted to Okorocha’s local and foreign accounts and used to purchase massive properties home and abroad. Billions of naira left by Ex-Governor Ikedi Ohakim were used by Okorocha to pay off his debt to commercial banks on assumption of office.

New Owerri reserved for relocation of Imo State Government house in view of Owerri expansion and in keeping to the Owerri masterplan was converted by Okorocha and shared to himself and family members without the fear of God.

Imo broadcasting corporation, IBC, quarters Orji, Shell Camp Staff quarters, Old State Secretariat Orlu Road, among other government properties were converted into Okorocha’s personnel and family Estate. In Imo, no one talks. Okorocha is the Governor. He controls the police and other security architecture in Imo. He controls the media and all correspondences in Imo. Some journalists were shared lands to keep their mouth sealed and influence their reports in favour of then Governor. He has the power of the word. He is a blackmailer in chief. He is a professor of propaganda. He is a street player and knows how to manipulate unsuspecting youths into thuggery. Yes, he is a great orator!

Under him, Imo ecological funds, Paris Club Refund, Bail-out funds all developed wings and disappeared . He couldn’t account for them. Imo people cried and consoled themselves. No project with economic benefits for Ndi-Imo was executed within his eight years reign. Phantom and impressionistic projects scattered all corners of Imo; a criminal pipeline to siphon ego Ndi-Imo!

To cement power, Okorocha plotted to install his Son-in-law and my very good friend, Ugwumba Uche Nwosu to take over reigns of power as Governor of Imo State after serving him as Commissioner for Lands and Chief of Staff. There are also plan for Okorocha to use his own son as Chief of Staff to would be Governor, Uche Nwosu. But God can’t be fooled, at the appropriate time, God said no, enough is enough. Chief Anayo Ethelbert Okorocha lost his 3rd term bid through his Son-in-law. Imo State was liberated, hossana and jubilation was the order of the day in Imo.

Ihedioha was declared Governor even without meeting the 2/3 constitutional requirements as reported, but because Ndi-Imo are tired with Okorocha, every stakeholder agreed to the Ihedioha’s declaration including yours faithfully. In solidarity, Ihedioha, was mandated by Ndi-Imo to recover all stolen by Okorocha. He immediately set up Hon Jasper Ndubuaku led recovery Taskforce, trust Okorocha, he mobilised his thugs and beat hell out of Hon Jasper, former member, Imo state House of assembly and Special Adviser to Governor Emeka Ihedioha. Okorocha intimidated the Ihedioha administration. Ihedioha in following due process of law, set up more than 7 (seven) administrative panel of inquiry into Okorocha’s administration malfeasance. The panels are yet to turn up their results before the ouster of the PDP shortlived administration headed by the former Deputy Speaker of the Federal Republic of Nigeria, Rt Hon Emeka Ihedioha.

In a twist of event, the Supreme in his wisdom declared Senator Hope Uzodinma of the All Progressive Congress, APC, as the duly elected Governor of Imo State, accusing INEC of unlawful exclusion and failing to do what is right . Uzodimma was welcomed by Ndi-Imo and again was mandated to recover all stolen by Okorocha.

Several panels set up by the Ihedioha led PDP government turned up their reports, and in exercise of administrative powers, Senator Hope Uzodinma led the State executive and an official whitepaper gazette was approved in line with the law to recover, seal and return Imo properties to Ndi-Imo, the original owners.

Senator Rochas Okorocha representing Orlu Zone in the National Assembly, forgot he is no more the Governor of Imo State and can’t continue to display his unlawful lifestyle, and mobilised his usual thugs, cross the red line and forcefully invaded a property sealed by the State government and under litigation with the economic and financial crime commission, EFCC.

Like his usual self, he told his thugs and supporters to beat up and arrest any Imo State government official seen at 4 billion naira estate at Akachi built under his tenure and owned by his wife, Nkechi Rochas Okorocha.

Unfortunately for Okorocha, Imo Governor’s aides, Chief Nnamdi Anyaehie (Chief of Staff) Mazi Chinasa Nwaneri (Senior Special Assistant on Special Duties) and Comrade Eric Uwakwe (Senior Special Assistant on Youth Affairs), stormed the Royal Spring Palm Estate with heavy police dispatch in response to distress call from the police stationed at the estate but were overpowered by Okorocha and his men. The Uzodinma’s aides stopped Okorocha and his men who had earlier intimidated the police officers and gained access into the property.

Meeting a resistance from Okorocha and his men forced the ever livid Chinasa Nwaneri to remind Okorocha his yester years, flog him and his men into submission and subsequent arrest and detention at the Imo police command for unlawful invasion, trespass and destruction of government property.

Giving Okorocha his style of action, all Okorocha’s vehicle, including those of his aides and security details were destroyed before he was arrested and thrown into the waiting hilux for onward reprimand at the Imo police command. Seeing what happened to their boss and his chief security details, Okorocha’s thugs ran for their dear life.

Warning, if Okorocha didn’t take time and apply common wisdom, the state government may encourage Ndi-Imo to give Senator Rochas Okorocha the Otokoto kind of treatment, were Ndi-Imo will possess their possession by themselves.

Enough is Enough!, Uzodinma wasn’t even in Imo when the action happened. When you see a man who doesn’t talk, fear him.

Lesson, from the shameful disgrace of Ex-Governor Rochas Okorocha. His followers, and thugs alike will be hiding now and may not have the liver to support foolishly Senator Rochas Okorocha anymore. If your boss is treated by Uzodinma’s aide as common criminal, your own case will be sorry.

One thought on “Okorocha vs Uzodinma: Story, Video and Photos”